How is your relationship is going with the extra time together during the lockdown?  Are you getting tired of avoiding certain topics for fear of starting one of those disagreements that could rage out of control, or more likely, just end in stony silence?

Are you continuing to put on a brave face while internally feeling more and more resentful about financial issues not being resolved, not getting enough sex, housework not being shared evenly?  Feel free to add your own pet peeves here as all couples have some disagreements ranging from how to spend the summer holidays or just this coming Saturday night.

After 20 plus years of longitudinal research, Doctors John and Julie Gottman are clear that conflict is inevitable.  The happy couples or the ones labelled as the Masters in Relationships still have conflict, they just do it more effectively.  They rarely show the negative patterns of interaction called the 4 horsemen of the apocalypse i.e. Criticism, Defensiveness, Contempt or Stonewalling.

In my earlier blogs, I have described Criticism and Defensiveness and their antidotes of soft startups and accepting responsibility for even part of the problem.  Today I want to focus on contempt.

Contempt involves looking down on the other person from a position of moral or intellectual superiority. It can be shown nonverbally such as eye rolls or lips curled up into a sneer.  Sometimes it is expressed in words like:

John Gottman details more subtle variations such as correcting your partner’s grammar when they are angry.  That usually escalates the situation.  It can make you feel momentarily superior but really damages the relationship.

In fact, expressions of contempt have been shown to be the single biggest predictor of divorce.  It also can make the person on the receiving end physically unwell and more likely to catch infections.

There are strong reasons to remove contempt from the relationship.  The antidote is to foster a culture of appreciation. You do that by deciding to really focus on the lovely and positive qualities your partner does have, instead of their annoying weaknesses.

I feel embarrassed to admit that the spirit of contempt can try to sneak into even the best of relationships. As a Clinical Psychologist who has spent many years of further training, it is tempting for me to assume I know best in some areas.  Let me give you an example which occurred in my household during a Do It Yourself project of remodelling a small bathroom.  This had been a work in progress for more than a year and we are both becoming fed up with the inconvenience and mess.  At times I have found myself thinking, “Never again.  What person in their right mind would consider building a bathroom from scratch by visiting Bunnings and watching Youtube videos?”

I have even expressed some of those thoughts, (minus the contempt) to my partner saying “Next time we will hire tradespeople!”

A minor situation occurred when I returned to find my partner sitting despondently surrounded by the tiles on the floor saying he no longer liked the ones we had chosen.  He said they made the room look claustrophobic and were not even lining up properly.  He showed me some tiny variation in the grouting lines which were less than 2 millimetres out. His idea was to tear it all up and start again.

Oh boy! I saw another 12 months of household disruption ahead of me.  More mess, more construction materials, more dust and one less working bathroom.  It was a real challenge to remind myself to stay calm and to practice what I preach to my couples.   I decided to focus on his mechanical skills, his desire to do it perfectly, his sense of aesthetics and appreciation of beauty, his hard work and our shared dream of improving the comfort of our home. I remembered his oft repeated comment that he was doing this for me, it was in fact a labour of love.

Then and only then I was able to respond sympathetically and respectfully.  That did not mean that I agreed to start the tiling all over again!  I gave lots of appreciation of all his hard work and empathy for the way he was feeling discouraged. I reminded him of the fact most of the people who use our bathrooms are short-sighted and will be focused on getting their basic needs met, rather than examining the correct layout of the tiles or the patterning.

Fortunately, he was open to hearing my suggestions and accepted my influence.  Phew!  I know this could have easily gone downhill without the relationship skills I teach my clients all the time.  It was rather nice to find out once again that communication skills are powerful techniques that actually work in real life.

If you are struggling with conflict in your relationship and would like to learn the art of appreciation,  I can help. 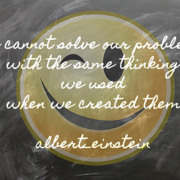 Self-soothing or Taking a Break.
Scroll to top